The Magic of Romance at the Bradford Literature Festival

When my romantic comedy “Who Does He Think He Is?” was published back in December 2016, I had no idea that just over six months later I would be appearing as a bona fide author at the Bradford Literature Festival.

I was invited to be a member of the panel at the Magic of Romance event alongside Sunday Times bestseller Milly Johnson and fellow debut author Sonya Lalli (look out for her romcom “The Arrangement”, out in August – I loved it!)

The Bradford Literature Festival started in 2014, and in just a few years it has grown into a huge annual celebration of all things reading and writing, with over 50,000 people attending this year’s Festival. With events covering everything from comedy to crime, Manga to mythology, there is genuinely something to suit everyone. If you’ve not visited, what are you waiting for?!

Events take place in venues throughout the city, and you only have to be in Bradford for 30 seconds to realise how much support there is for the Festival. There were banners everywhere, people wandering around with books in their hands, and a pop up book shop right in the heart of Bradford City Park was doing a roaring trade.

I have to admit I was rather nervous about appearing at my first literature festival. I’ve been to plenty as an audience member, but it’s rather different being up there on the stage! Fortunately my nerves disappeared when I met my fellow authors and our wonderful event chair Jodie Matthews. After all, what could be better than talking about romance and writing with other enthusiasts!

The event took the form of a panel discussion, with lots of input from the audience as well. We talked about our writing influences, what makes a good hero (there was definitely some swooning over Jane Austen’s Captain Wentworth) and how we set about writing a book. 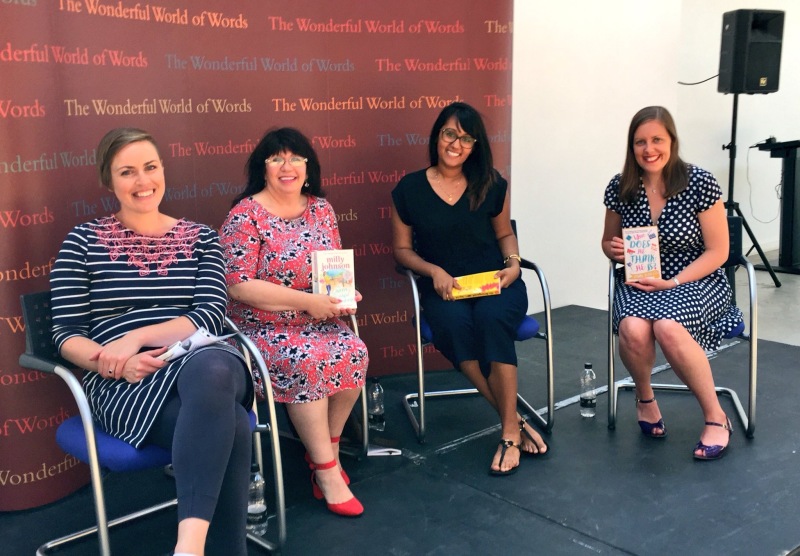 The Magic of Romance panel from left to right: Jodie Matthews, Milly Johnson, Sonya Lalli, me!

It was really interesting to hear from my fellow panellists and to compare our different approaches to our work. It definitely made me think in a more analytical way about the genre as we discussed what factors make romance magic for us. We also laughed over how being a writer can sometimes make you seem rather crazy, for example when a character you’ve created does something completely unexpected and takes you by surprise!

The hour just flew by and I thoroughly enjoyed every second. And the icing on the cake was to see my books for sale alongside Milly Johnson’s and doing a book-signing at the end of the event. Thank you so much to the Bradford Literature Festival for inviting me along.

This just about covers it!

This week has been very exciting because the cover of my book ‘Who Does He Think He Is?‘ has been revealed to the world. In fact if you take a little peek below, that’s it there:

So how did the cover come about? My publisher Crooked Cat really encouraged me to be part of the process which was brilliant. We talked a lot about how to make it bright and tempting to readers. I am very appreciative of how they were incredibly tolerant of the child-like sketches I sent them of some of my ideas. (Actually, most children can probably draw a lot better than me!)

The sketches then graduated into some cutting out and sticking of pictures. I did a bit of brainstorming on a train journey to come up with the tagline, and then the marvellous Laurence from Crooked Cat worked his magic and produced the cover.

What do you think? I am so thrilled with it. Suddenly the book seems even more real and I can’t wait for 15th December when it is released….

After being rather lax of late with this blog, I have given myself a good talking to and am making a new year’s resolution to do more with it. And yes, I know it isn’t actually new year, but it’s September and lots of people are starting new academic years, so that counts, right? Anyway, my intention is to post something every week, so do keep checking in, it’s lovely to have you along.

It seems appropriate to start this resolution with Very Exciting News. Drum roll please…my first novel ‘Who Does He Think He Is?’ is being published by Crooked Cat and will be available to buy this very December. As you can imagine, I am absolutely thrilled. In fact, when I got the email offering me a publishing contract I did a little dance at work, much to the amusement of my colleagues!

‘Who Does He Think He Is?’ is a romantic comedy and tells the story of twenty-something Lady Aurelia Osbourne-Lloyd, who has long wished her bank balance was as big as her name. She’s struggling to stop her ancestral home Leydale Park falling down around her. The arrival of a film crew to use the estate as a location brings a whole new level of chaos into her life, especially as it seems leading actor Xander Lord has an ulterior motive for wanting to film there…

Intrigued? Well, keep an eye out and I’ll let you know as soon as it’s available to pre-order.